In many respects Japanese culture is all about specialization, an aspect of life that's reflected in the dazzling array of Japanese knife styles. We can buy knives that do any little task just that little bit better because there are always those users who specialize in that one task.

On the other hand many of us just want a good, sharp, do-it-all blade with satisfying cutting feel. 'Santoku' is a well known label for such a knife, 'bannou' perhaps less commonly known outside Japan but for all intents and purposes either could be called the other.

The funayuki-bocho is a knife that arose from a similar philosophy. The 'funa' in funayuki refers to boats, and fisherman on them need to prepare meals while out on a fishing expedition; the funayuki's purpose was originally preparation of fish and vegetables in a narrow space.

And there's our specialization. The funayuki is the all-rounder for hungry, hard-working men cooking at sea.

The sharp tip is what sets the funayuki apart, with a more aggressive, pointed profile when compared to a bannou or santoku. Same thin blade.

Kawatsu Hamono's black-forged blades combine a touch of wa sensibility with a standard of finish that satisfies a craftsman's eye. We love Kawatsu san's exacting approach - you can see it in his well-ordered workspace and every knife he makes. 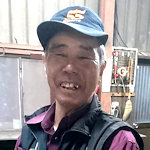