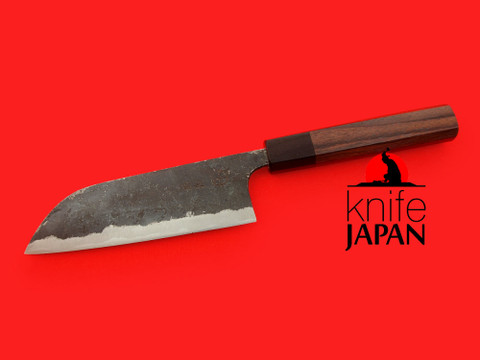 Some people collect shoes. Some like green glass. There are plenty of us who collect knives, and there are plenty of Japanese knife-gatherers who come back to Kuwahara san to bolster their horde with their third, fourth and fifth purchase from him.

They appreciate the attention to detail, method and tradition and we think you will too. These are kitchen knives of uncommon sharpness and edge retention that Japanese reviewers say are relaxing in hand and a joy to use. Kuwahara san's black-forged santoku-style bannou-bocho is forged, shaped and sharpened in meditative fashion by the man himself, quenched in mineral-laden artesian well water flavored with the local volcanic earth of Kayaki-cho.

The hagane core extends some 70% of the blade width. Plenty of room to whittle it back over a couple of decades' sharpening. The beautifully rendered kurouchi finish is complemented by the rosewood handle - one of the most comfortable you'll find - which happens to be unique to Kuwahara san's knives. The (patented) handle is constructed of three woods - polished rosewood outer, hounoki (magnolia) core and an eco-friendly pakkawood ferrule. This is not a long knife but it feels long enough. It's not heavy but it feels weighty enough. There more than a hint of nakiri in the belly - a good choice for users who like to prepare meals heavily weighted with vegetables.

There's history in the name. The township of Kayaki-cho has a long association with the nearby island of Hashima, also widely known as Gunkanjima. They shared the local stage in Japan's Meiji-era industrial development and knife makers in the area long utilized the high-grade coking coal extracted from Mitsubishi's undersea Hashima mine. It's an appropriate marketing association, hence 'Nagasaki Gunkanjima bannou-bocho'.

One more point of historical interest - the ㊉ mark on Kuwahara san's blades is the crest of the powerful Shimazu clan, feudal lords of the lands of Satsuma. Satsuma officials granted Kuwahara san's grandfather use of the crest on his blades, allowing it to be used in perpetuity as a mark of excellence and trust.