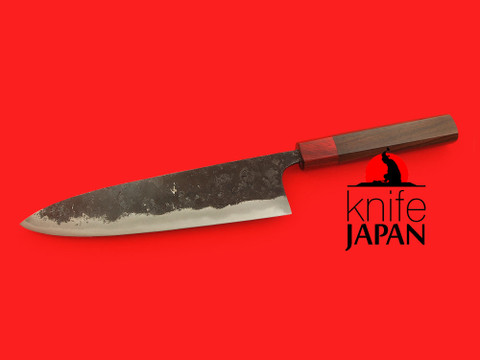 We tend to think of knife making and steel work as a purely technical pursuit but here, in Japan, there's a spiritual aspect to knife making that is easily overlooked.

Kuwahara san has devoted his working life to honing his skills beyond the point of technical excellence, to a plane that allows him to impart his ki, his fundamental energy, into the execution of every blade. Yes, making knives is a commercial enterprise and knives are essentially a product. So are those tea utensils that fetch more than the price of a Tokyo condominium. There's more to it than meets the eye.

Kuwahara san's kurouchi gyuto is forged, shaped and sharpened in meditative fashion by the man himself, quenched in the natural mineral-laden well water of Kayaki-cho.

The hagane core extends some 70% of the blade width. Plenty of room to whittle it back over the next couple of decades and maintain a keen edge. The beautifully rendered kurouchi finish is complemented by the rosewood handle - one of the most comfortable you'll find - which happens to be unique to Kuwahara san's knives. The (patented) handle is constructed of three woods - polished rosewood outer, hounoki (magnolia) core and eco-friendly pakkawood ferrule. Kuwahara san is ahead of his time - horn ferrules are to be phased out in coming years.

Note that there's a choice of ferrule - red and rainbow are available choices. Kuwahara has fun with his marketing and this gyuto with red ferrule is his 'onna-no-hocho' women's knife - it sounds more natural in the Japanese. The black ferrule choice is his otoko-no-hocho - a gyuto for the boys - and the rainbow ferrule is his 'minna-no-hocho' - a gyuto for everyone. Not sure if Kuwahara san sees the zeitgeist connotation there but it's nice.

It's important to note that it's not just about the materials - it's about an attention to detail, method and tradition that delivers a kitchen knife of uncommon sharpness, user-focused form and forget-about-it edge retention; one that's comfortable in hand and a joy to use.

Let's unpack the name. The township of Kayaki-cho has a long association with the nearby island of Hashima, also widely known as Gunkanjima. They share an industrial history and knife makers in the area long utilized the high-grade coking coal extracted from Mitsubishi's undersea Hashima mine. It's an appropriate marketing association, hence 'Nagasaki Gunkanjima Yanagiba-bocho'.

One point of interest - the ㊉ mark on Kuwahara san's blades is the crest of the powerful Shimazu clan, feudal lords of the lands of Satsuma. Satsuma officials granted Kuwahara san's grandfather perpetual use of the crest on his blades, allowing it to be used as a mark of excellence and trust.