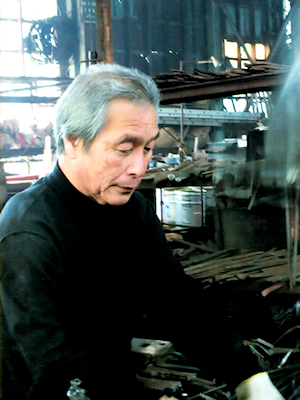 Shimane Prefecture is a fascinating place. Regional culture is deep and rich, and metallurgy has long been at the heart of it. The Japanese word tatara - the name for the furnace technology used for producing iron from sa-tetsu iron sand - has its roots in Shimane, in what were once Iwami and Izumo Provinces.

Today Iwami Province is modern Oda city, where as recently as the 1940's there were still some forty local concerns producing edge tools from local steel. In 1947 Kenichi Okada entered a thriving industry and in 1950 established Okada Tekko Hamono, better known as Iwami Okamitsu. Today the company is the last active knife and edge-tool maker in the district, going strong, producing knives and agricultural tools for a region where fishing and farming are still deeply embedded in local lifestyles.

President Makoto Yamada (Okada san's son-in-law) is an old-style craftsman with the soul of an artist, forging his own path and in that slightly disconcerting Japanese fashion still polishing his formidable forging skills after more than forty years of application.