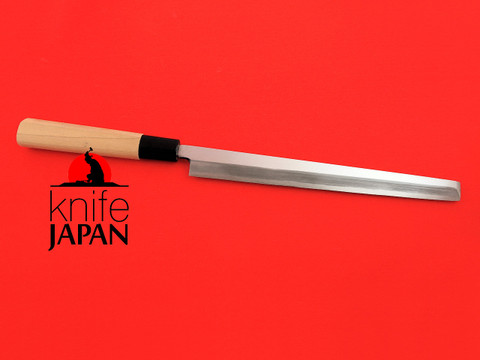 The takohiki is a sashimi knife, the style is said to have originated in the Kanto region around present-day Tokyo. Tako being the Japanese for octopus it's easy to assume the takohiki is a specialist knife for cephalopods but it's not the case - this is a sashimi knife pure and simple. Why octopus? We don't know for sure but we think it's likely that it's because tako is an unforgiving sashimi subject - if you don't cut it nicely octopus can look rather grotesque and the takohiki is the knife for the task.

Actually the takohiki is a bit of a mystery all round. Why the square tip? That one is lost in time but the story goes that feudal lords weren't keen on non-samurai wielding a sword-like yanagiba. Another theory has it that those argumentative Eddoko (the people of Edo-era Tokyo) kept stabbing each other with pointy fish knives, and a squared end made them that much less lethal.

Anyway that's all in the past. All Unshu Yukimitsu Hamono blades are beautifully finished and this 225mm (roughly 8.9") takohiki is no exception.

The history of this maker does in fact reach back to the Edo era, it started as a family concern producing edge tools in the mid 1830's in what was Izumo Province, the original heartland of Japanese steel culture.